Gerard Pique says big changes are needed at Barcelona following their "humiliating" 8-2 loss to Bayern Munich in the Champions League quarter-finals.
The 33-year-old defender, who has won 20 major titles over 12 years with the club, added that he would be "the first to leave" if the club wished it.
Friday's loss was the heaviest Barca have suffered in Europe and ends a season that has also seen them lose the La Liga title to Real Madrid.
"We have hit rock bottom," said Pique.
"This is not the first, nor the second, nor the third time. We are not on the right path."
He continued: "Coaches and players follow one another, but it has been several years since we have been able to be competitive on a European level.
"We all have to think internally and decide what is best for the club, for Barca. Tonight was unacceptable for Barcelona.
"It's very hard to take but I hope it will be useful for som 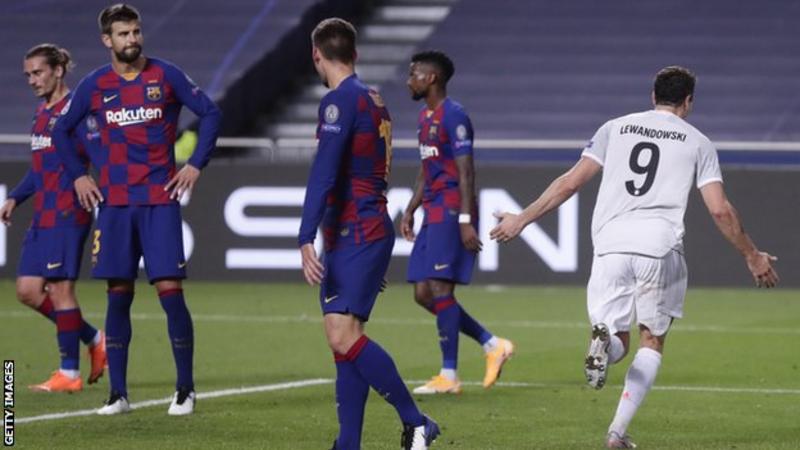 ething, for us to all think about it.

"The club needs changes. And I'm not talking at the level of the coach or the players, but structurally the club needs changes of all kinds.
"We must bring in new blood to change this dynamic, and if necessary, I would be the first to leave."
Barca have a presidential election in the summer of 2021, to seek a successor to incumbent Josep Maria Bartomeu.
Barcelona head coach Quique Setien was already under pressure heading into the quarter-final tie following a disappointing seven months in charge after succeeding Ernesto Valverde in January.

When asked about the future of the club and Pique's comments, he responded: "I'm not going to talk about what is needed at the club. I've been here for just a few months.
"If Gerard says that it's time for big changes there's going to be importance to his words. It's time for us to review and take the decisions which are needed for the future."
When asked to address his own future at the Nou Camp, he said: "I think that right now it's too soon to be talking about whether I stay at the club or not. The reality is that it doesn't depend on me.
"It's worth all of us working out what's important and considering a wide range of things which correspond to a defeat of this importance and which is so painful."